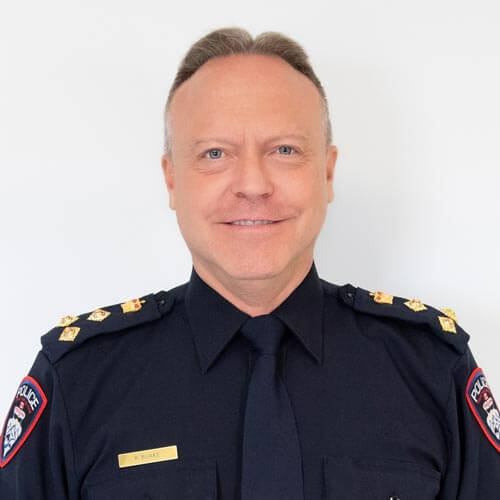 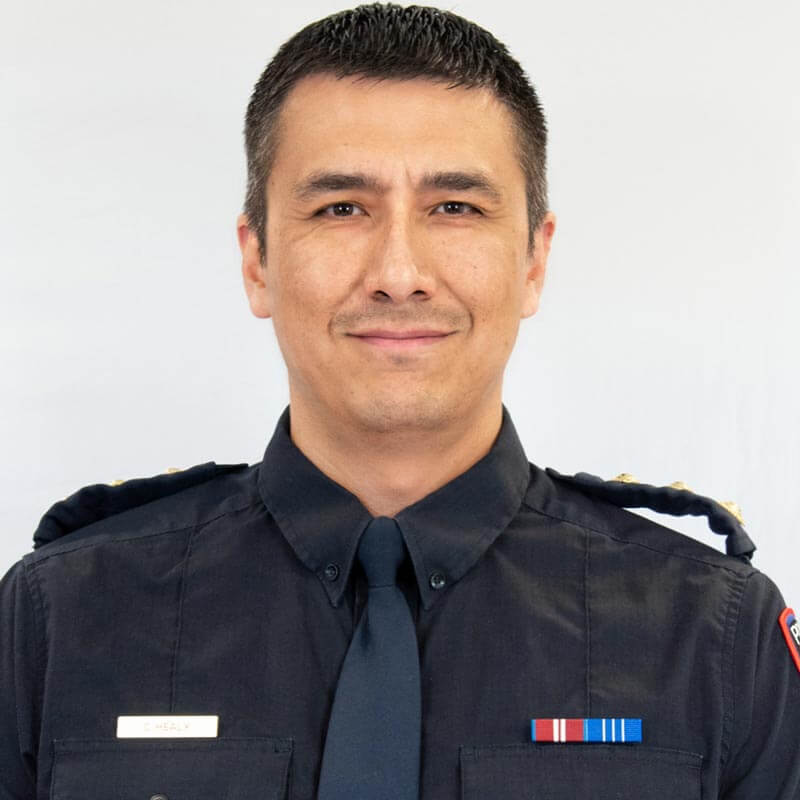 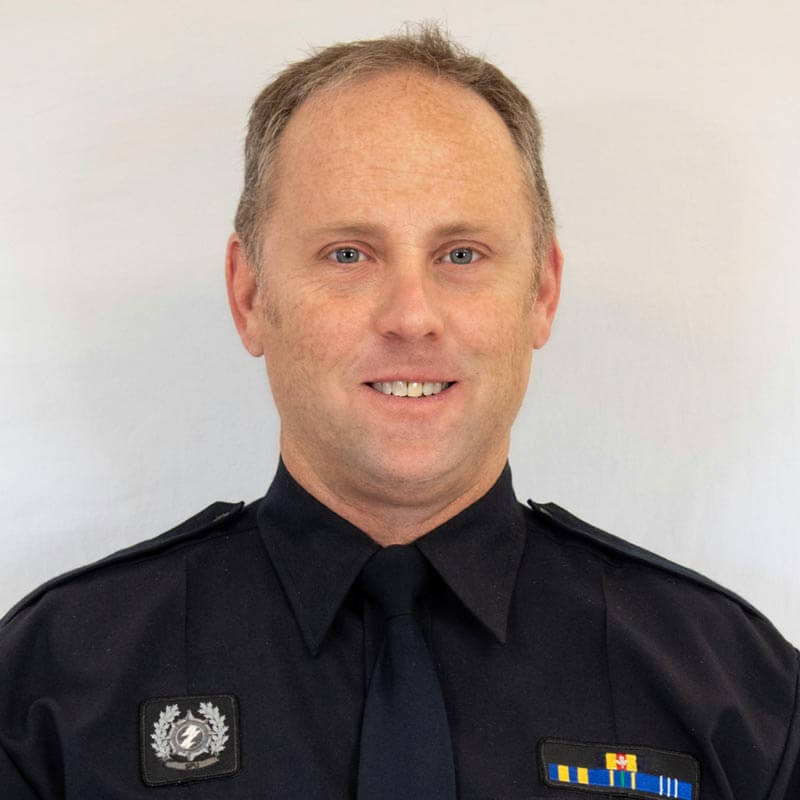 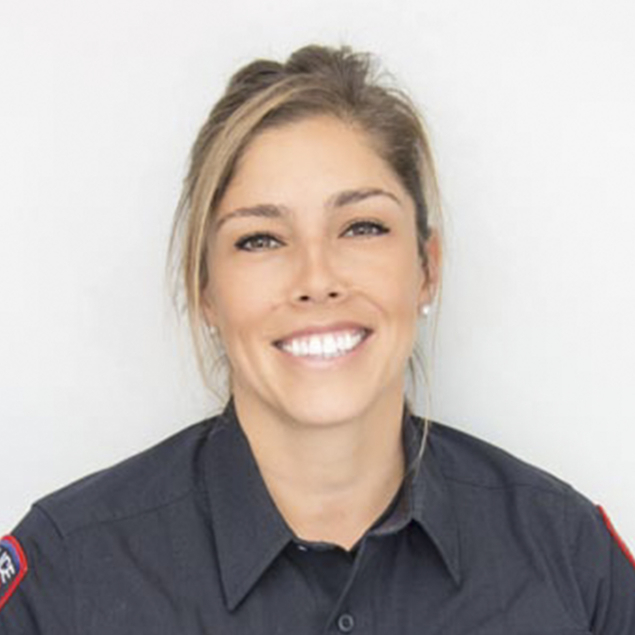 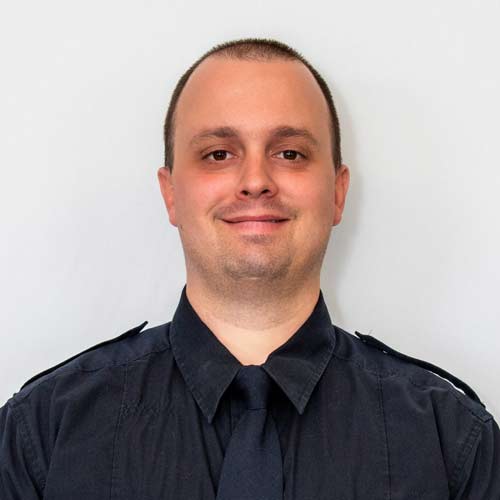 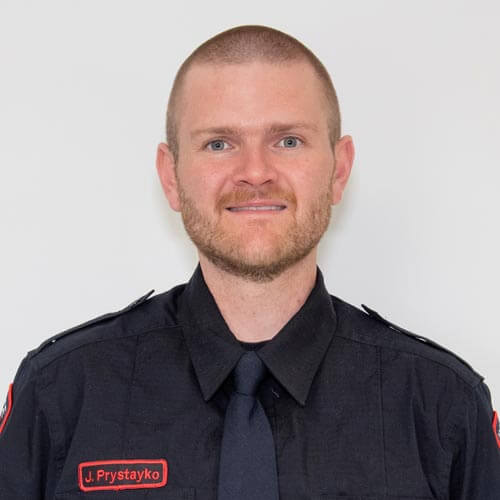 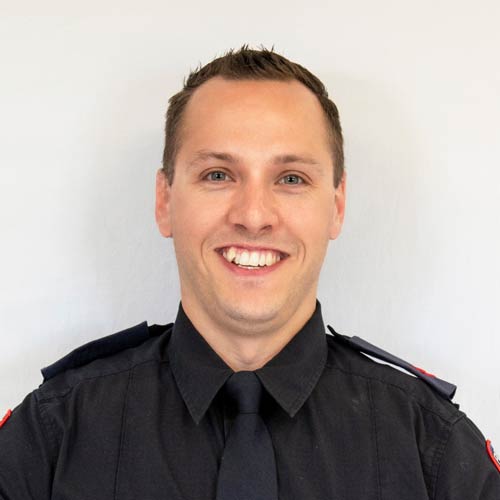 Chief Keith Blake was sworn in as the 5th Chief of Police of the Tsuut’ina Nation Police Service on May 16th, 2013.

Prior to his appointment with the Tsuut’ina Nation Police Service, Keith served 24 years in the Royal Canadian Mounted Police. Keith was privileged to have completed all of his service in the Province of Alberta and experienced firsthand the culture, pride and honour in being part of the policing in seven different First Nations communities in Alberta.

Chief Blake is honoured to serve the truly great people of the Tsuut’ina Nation and work alongside the dedicated men and women of Tosguna.

During his time with the Tsuut’ina Nation Police Service, Inspector Healy has spearheaded major investigations, conducted high-level interviews, and been in charge of several patrol units.

Insp. Quinn Jacques joined our Service in 2016. Prior to joining the Tsuut’ina Nation Police Service, Quinn served 25+ years with the Calgary Police Service – retiring as the Staff Sergeant in charge of the Guns and Gangs Unit. This unit was, and is, instrumental in combating gang activity in Calgary.

Quinn’s work experience includes assignments in the Criminal Intelligence Unit, the Drug Unit, the Integrated Response to Organized Crime Unit (IROC), the Gang Suppression Team and the Strike Force Unit. Quinn has spent the majority of his career either investigating, or managing gang, drug or organized crime offenses.

After spending 12 years with the RCMP, Dawn joined the Tsuut’ina Nation Police Service in 2010.

Dawn-Lyn was promoted to Cpl. in 2016 and has been actively involved and instrumental in the creation and development of the Community Response Unit (CRU) of the Tsuut’ina Nation Police Service.

While in her position the unit evolved to three officers and one civilian who represented the Crime Prevention Coordinator position. Dawn-Lyn has been the driving force behind the TNPS’ community programs over the past eight years, in addition to her successful work as the inaugural Community Youth and Family Liaison Officer, a position created to build relationships with the youth in the community.

In 2017, Dawn-Lyn was promoted to Sgt. Where she is currently the NCO i/c of Operations. As part of her duties, Dawn provides oversight to all High Risk file investigations within the Service. Dawn-Lyn has investigated the majority of Major Crimes Investigations on the Tsuut’ina Nation since her arrival and is the primary interviewer for our major crimes investigations.

In 2017, Dawn-Lyn was the recipient of “Officer of the Year Award” from the First Nations Chiefs of Police Association and was presented her award in April 2017, in Niagara Falls, Ontario, and in true fashion, was an excellent ambassador of our Service.

Corporal Wilfred (Chucky) Marsh joined TNPS in November 2014. Prior to joining TNPS Corporal Marsh worked with the North Peace Tribal Police Service, primarily in Fox Lake, Alberta, which is an isolated fly in community between December 2012 and October 2014. Corporal Marsh received his police training at the Atlantic Police Academy in Summerside, PEI in 2012.

Corporal Jon Prystayko is from Winnipeg, Manitoba. He has been policing for 10 years, in the Northwest Territories and Alberta with some special postings in other places. He enjoys outdoor activities, running, fixing things, and travelling. He is proud to work for the Tsuut’ina Nation Police Service because they care about the community and are encouraged to do what is right, not what is fast or easy. Encouraging staff to do right by all people regardless of the difficulty is the method the service uses. Jon's Tsuut’ina nickname, given to him by the kids at the Junior Senior High School, is Dich’uzha Tsicia which means “chipmunk”.

Corporal Tim Daley joined our service in May of 2014. Prior to joining the Tsuut’ina Nation Police Tim worked for the North Peace Tribal Police Service in Fox Lake, Alberta. Fox Lake is an isolated fly in only community. Tim had also worked for the Katavik Regional Police Service in Northern Quebec. Acting Corporal Daley trained at the Atlantic Police Academy in PEI and has only policed in First Nations communities.